“Most football teams are temperamental. That's 90% temper and 10% mental.” 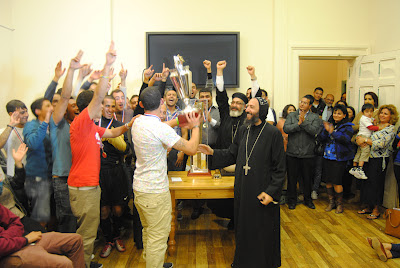 We patiently waited for summer to end and autumn to dawn upon us. June... July...  August...  September... That’s right. It was time to separate the fine from the foul, the slackers from the slick and the fat from the fit. Before September closed its curtains on us for yet another year, it went out with a bang: COFTA 2012.

This year saw the absence of the Rotherham boys as they were preoccupied celebrating a wedding in the only way they know how – “three days in the monastery post-ceremony”. . . Sure. As finalists for the previous two years, the draw was thrown wide open. The North was not to be forgotten though as Nottingham made their return to the elite scene after several years out.

The day started off late, as usual, with the traditional prayers and photo after the gate was disassembled by the custodian of the spanner himself: Uncle Rafat. With the first two group games getting underway, comfortable victories came to the holders, Brighton, and to Croydon. As St George FC took to the pitch against Nottingham, one thing became clear. Up north, “Football is like nuclear warfare. There are no winners, only survivors.” This proved true as both teams were held to a draw on both occasions and all we had to show for it was battle scars likened to those on the frontline (pictures available upon request). Lucky Elia missed it all as he prioritised his MOT above his football. BUT GOOD NEWS PEOPLE! He passed! Needless to say avoid the roads.

Right before we called half-time on the day, a St George FC player, who shall remain Amonyous...I mean anonymous, decided that 3-0 down in the second half it would be wise to play Maradona in his own net. The referee kindly gave the goal to spare him further blushes (which Brighton would inflict later that day).

Lunch time was upon us. Forget half-time oranges; burgers and chips were the highly nutritional snack of the day with the only veg in sight that of ketchup. Enough said. Clearly Jamie Oliver’s healthy eating campaign had yet to hit the Coptic Community within England. Chief Galtta’s touch was truly missed.

You may be wondering where St Mark’s feature in the picture. They packed their bags and made their way home after the first day of action following retirement from the game of big names such as ex-captain “The Ramon Risk” himself. But St George FC were determined not to go out without leaving their mark on the tournament (as Nottingham had on my leg). And they did just that. 11-1 losers to Brighton in what was the greatest ever defeat in COFTA history. With players putting in transfer requests in left right and centre, rumour had it that COFTA team’s players would hereby be decided by geographical location... Couldn’t agree more. I’m on my way to Brighton as we speak and the whole Brighton team is being deported back to Germany and France. 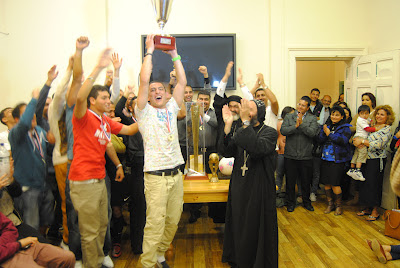 Day Two saw Croydon meet Brighton in the final which saw, ex-St George player, and now almost amateur referee, G. Farah do a much better job than some of the other refs across the weekend *COUGH-Fady Malik-COUGH*. Clearly underdogs, Croydon took the lead with an emphatic strike by Meerky-cat which sent their fans and crippled Egyptian punter Michael Tadros into euphoria. Vin Diesel soon after silenced the masses and sent Fr Yohanna in the clouds, a familiar place for the Man of Cloth, with a great penalty (Michael Shenouda, take notes). Soon after, COFTA’s first broken bone when Brighton’s Shady snapped his collar bone in two and had to be lured off the pitch as he insisted he was fit to play... There was some truly remarkable football played by both teams.

The final continued into the darkness and when extra-time couldn’t separate the teams it went down to penalties. At this stage, the Sports Correspondent had to make his way home and missed the shootout. He did hear however that it was an enthralling encounter that ended with the Brighton keeper almost losing his life in the post-match celebration.

Either way, there was one team that really shone out from the rest in their spirit of love, peace and graciousness. Furthermore, they played some of the highest quality football COFTA has ever seen. Their two training sessions a week had paid dividends and Brighton became the first team to win COFTA three years on the trot.

Brighton, next year save yourself the journey and the hassle. Keep the trophy and we’ll call it quits ;)


COFTA Secretary & Sports correspondent
J. Shenouda
Coptic Media Group and Coptic Youth Mission take no responsibility for the opinions of their correspondents. Complaints should be made directly to the Leveson Inquiry or the correspondent (without violence of course).
Posted by Coptic Orthodox Church Centre UK at 03:11